The Greatest Shoal on Earth

Described as the Greatest Shoal on Earth, the annual sardine run along the coastlines of the Eastern Cape and KwaZulu-Natal in South Africa is as unique a wildlife safari as there is to be undertaken. Millions of these migrating fish create an adrenaline rush for spectators and participants alike. 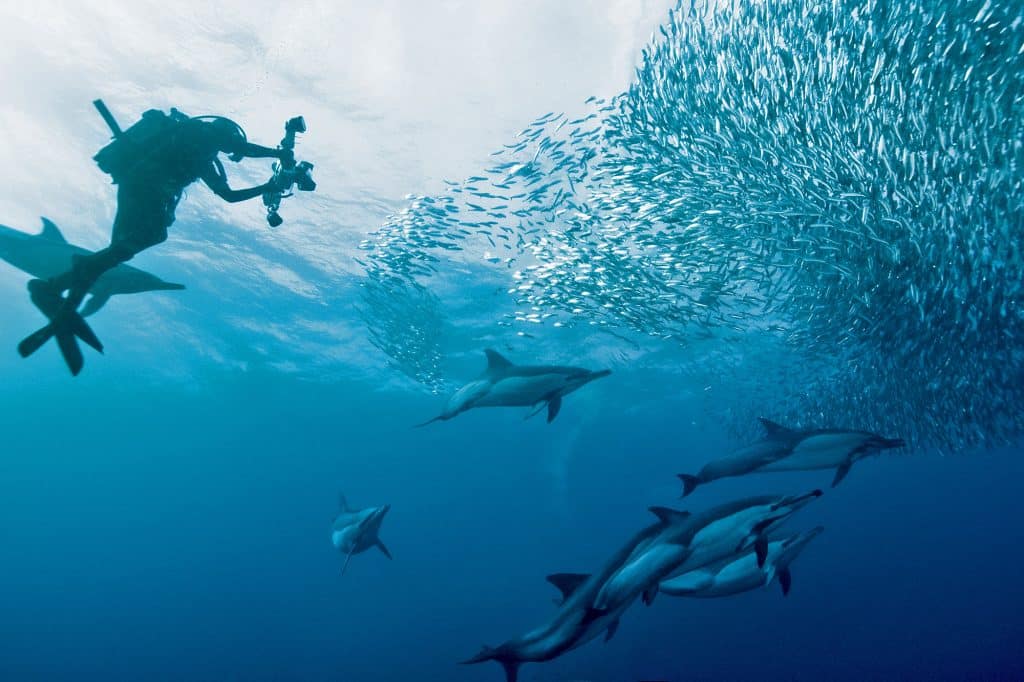 These masses of sardines stretch to lengths of more than seven kilometres long, almost two kilometres wide and nearly 30 metres deep. This ingrained behaviour is believed to act as a manner of self-preservation, but it’s a case of six of the one and half a dozen of the other and adds a unique twist to this safari outing.

The astonishing experience of witnessing the frenzied action from above—by species of the feathered-kind dive-bombing into the water—and below by predators big and small—will take observers’ breath away. This annual seafood buffet comprised of gorging on an elevated scale by sharks, dolphins, whales, and a great variety of birds is a sight to behold.

The species of the Sardine Run

The silver, lithe body of the sardine propels this nimble little fish at great speeds through the water. The dark spots on the side, the blue-green back with a dorsal fin, and scales on the belly complete its armour.

Apart from the annual run along the South African southern and eastern coastline, sardines also perform a daily vertical migration. This occurs when fish move to the water’s surface at dusk before returning to depths of up to 200 meters at dawn. Sardines gorge themselves by slowly moving through the water with their mouths stretched open and filtering their food by using their gill rakers. They feast on phytoplankton and zooplankton.

Interesting Facts about the Sardine Run

The yearly extravaganza when millions of sardines provide a free-for-all buffet for man and beast alike is equally rich in other curiosities:

• The first mention of the sardine run was in August 1853 in an article in the Natal Mercury newspaper.

• In the past 40 years, there have been four ‘non-runs’ due to the water not reaching the optimum temperature of below 21 °C for the migration to occur.

• About 200,000 tonnes of these little fish are caught each year between May and July.

• The so-called bait balls can be up to 20 metres in diameter and last for as long as 10 minutes as the fish are rounded up by predators.

• The sight of killer whales chasing the super-pods of dolphins feasting on the sardines, is not uncommon.

Where to see the Sardine Run

The stretch of cool water just off the shore and all along the southeast and east coast of South Africa is prime real estate for the sardine run. Encounters can be arranged from as far as Port Elizabeth, East London, Coffee Bay and Port St Johns on the Wild Coast. Onwards and upwards along the KwaZulu-Natal coast, there are numerous fertile spawning grounds.

It is best to pick a spot and stay put. Visitors can expect to keep the eyes strained on the water’s surface for hours on end and should be ready to move to the next location at a moment’s notice.

The intricate way that the cycles of the currents and the weather have to create the perfect conditions don’t make a yearly run a foregone conclusion. With the movement of the cool waters from the Agulhas Bank northwards and forth along the South African east coast, the optimum time to be a spectator to the sardine run is between May and July.