The mountain range is chiefly tall peaks and gently rounded hills, with slopes carpeted in typical montane vegetation varying from grasslands to Miombo woodlands and short scrub. Cascading waterfalls plummet into crisp streams and springs, enhanced by the beauty of deep-set verdant valleys and gorges.

Outdoor enthusiasts descend upon the park for its challenging hiking and rock climbing activities, that give rise to exquisite aerial views over Zimbabwe’s highlands. General wildlife is in abundance, and visitors can expect to see mainly sable and plains game. There’s also an eland sanctuary worth visiting.

The main town serving the Eastern Highlands is Mutare, which is 150 km from the national park. The closest airport to Mutare is the Grand Reef Airport (FVGR), and the closest international airport is Harare International Airport, which is roughly 400 kilometres away. Visitors need to be aware that there aren’t many scheduled flights to the highlands region.

Q Can I do walks in the park?

The park’s challenging hiking and rock climbing activities are its best features. The more difficult routes can only be attempted with a knowledgable guide.

Q What type of accommodation is available in the park?

Since the park is mainly a hiking destination, camping is allowed and visitors can do so free of charge. There are also a few basic huts along most hiking routes.

Although Chimanimani is not known for its wildlife, there is still abundant mammals and birdlife in the area. Bushbuck, sable, duiker and eland roam the slopes and make up the bulk of the mammal sightings. Eland is prolific, and there is a protected sanctuary for eland within the park. Rumours of leopard activity in the region are rife, but sightings are incredibly rare.

There is a range of commonly spotted birds in Chimanimani, in particular Augur buzzards. The buzzards can be spotted when hiking the higher slopes. Other birds of prey to spot include the Dickinson’s kestrel, southern-banded snake eagle and the Taita falcon.

The fynbos-like vegetation of the slopes provides the ideal habitat for a variety of sunbirds, shrikes and chats. A few interesting species to look out for include the Miombo grey and Rufous-bellied tits, Barratt’s warbler and the green-capped eremomela. The Roberts’ Prinia is an Eastern Highlands special, one worthy of seeking.

November to April is the rainy season, the time of year when the landscape experiences orographic rainfall. The rain is not constant, but visitors can expect heavy mist and cloud cover during this period. August the temperatures drop to below zero.

March and April, and from August to September are the ideal times of year to visit. Temperatures are more moderate. However, because this is a mountainous region, temperatures can soar during the day and drop in the evening. Visitors need to be prepared for all types of weather conditions.

This is a hiking and rock climbing destination famed for its challenging treks. A guide is needed for the more arduous routes. Visitors can expect an undiscovered lost world of mountainous beauty. Die-hard hikers are encouraged to summit the tallest peaks and overnight in the huts en route.

There are various sections to hike on the mountain range, one of which is Banana Grove, the place to sheer cliffs. On the higher slopes, the birding is fantastic. Plenty of raptors can be seen soaring in the skies.

Thrilling swimming opportunities await at Digby’s waterfall, a seven-metre waterfall plummeting into a bowl of icy water. Another popular waterfall is the Bridal Veil Falls, a fantastic picnic site just a short walk from the main village.

There are also numerous caves hiding in the mountains, just waiting to be explored. A few of these shorter walks to the caves are ideal for day walks from the village.

In the Chimanimani District, there are a few lodges and hotels, all located in the village. The village is located about 25 kilometres from the entrance to the park. There are no roads inside the park, and development is limited.

The only accommodation inside the park is limited to stone hiking huts close to the base of the mountains and basic hiking huts further up the mountain. These huts are furnished with beds and a basic kitchen with utensils but are quite rustic.

All visitors are allowed to camp free anywhere within the park, free of charge. More adventurous visitors seek refuge in the many caves of the area. 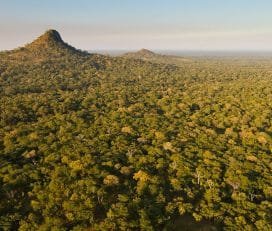