The riveting Ruvuma River serves as the border for the Liparamba Game Reserve in southern Tanzania, a passageway for the migration of elephant herds on the move from Selous Game Reserve in Tanzania to Niassa Reserve in Mozambique.

The massive elephant herd sightings are the major drawcard of the area, and the riverbanks of the Ruvuma provide a front-row seat to this exhibition of wildlife. Landscapes that are predominantly swamps, riparian forest and Miomba woodlands cocoon the Ruvuma River, and provide the idyllic natural habitat for hippo, basks of crocodiles, zebra, lions, leopards, wild cats and colobus monkeys.

The varied ecosystem of Liparamba covers 571 square kilometres of topography that ranges from flat landscapes to undulating terrain comprising escarpments and wetland hills.

This game reserve is not a developed tourist destination and is far from any tourist route, making it relatively inaccessible. The closest domestic airport is Songea Airport which serves southern Tanzania. Most of the major international airports have connecting flights to the domestic airport.

The powerful Ruvuma River is of ecological value and is the reserve’s only permanent source of water. During the dry season, it’s almost a guarantee that visitors will see elephant, buffalo, crocodiles, hippo and other water-loving animals.

The is not only a migratory route for elephants but also a corridor for sable, waterbuck and eland to cross over into Mozambique. Other regular animal sightings include small populations of zebra, bush pig, wild cat, warthog and—very rarely—leopard.

There are a few primates in the area, confined mainly to the woodland areas. These include vervet monkeys, colobus monkeys, and baboons. Bird species include (but are not limited to) Egyptian geese, kingfisher, weaver, mourning collared-dove, purple-crested turaco.

Liparamba Game Reserve has a typically tropical climate with varying temperatures. May to July is the cooler time of year, while October to December is the hottest. The heaviest rain falls from March to April, which is the wet season. The dry season is from July to September and is the best time to visit the reserve.

Because of the lack of tourism infrastructure, safari options are limited in this reserve. The undiscovered element of this reserve holds great appeal for budding adventurers! There's no better reward than observing and photographing wildlife in hidden corners of the globe.

The Ruvuma River is the main part of the game reserve to visit and provides exciting opportunities to photograph all types of wildlife. The two main activities in the park include photographic safaris and eco-tourism walking safaris which take place in the wetland hills and open plains.

Liparamba Game Reserve is a remote destination and hard to access. There are no accommodation options inside the reserve, but intrepid explorers can camp with permission from authorities.

Visitors stay on the outskirts of the reserve, in the airport town of Songea. There are several heritage hotels in the town, ranging from low to high budget. 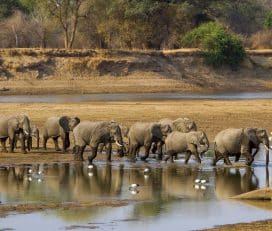 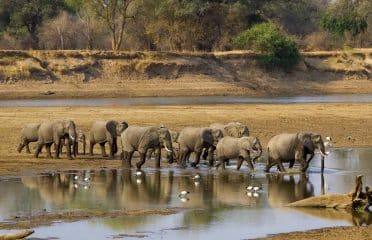